The Cultural Revolution was a chapter of unprecedented upheaval in Chinese history; sitting on a soft pillow instead of a hard chair could earn you a stern accusation of being a counter revolutionary. The political and social atmosphere rivaled anything George Orwell put in his fictional 1984. Truth is stranger than fiction.

It is it any wonder then that contemporary Chinese art expresses a degree of cynicism? People who lived through 20th century China experienced a shift from ancient Dynastic rule to near anarchy to sleek skyscrapers shooting up out of the rubble. Civil war, invading forces and a complete cultural reboot has culminated today in a hungry consumer culture and new frontier of rising tycoons. Where once the poor worker was heralded as China’s undisputable hero, the shopper now reigns supreme. Really, how could you not be cynical?

The art trend, dubbed Cynical Realism, is characterized by stark colors and subject, mixed with some recognizable symbols or archetypes and peppered with absurdity. It is a unique expression that captures the moment in Chinese history so accurately, yet seems to leave so much unsaid. Speaking without saying is in itself an art form in China as historically one never knows when they are running afoul of the sometimes murky lines of censorship and legality.

At Reorient we have collected Chinese art for decades, both professionally and as a personal passion. We are very proud to offer a selection of original Cynical Realism paintings. While the artists represented in our selections are not the same ones whose works now fetch millions at auctions by Christie’s and other top line art market makers, they do follow in the same foot steps, exhibit some of the same forms and certainly emerged from the same crucible. 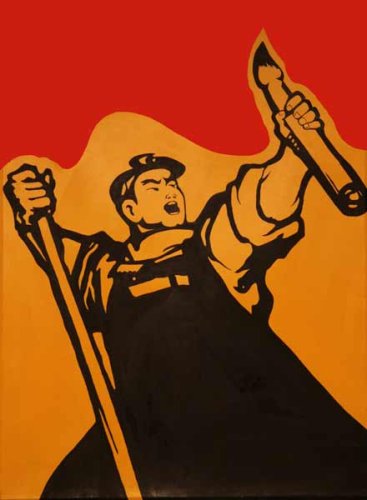 Please browse our current selections and check back as we build on our latest fascination with the Far East.