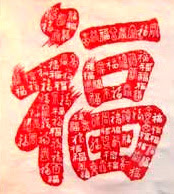 The Chinese language is replete with homonyms. The meaning of a word can be entirely altered simply by the speaker’s intonation or inflection. This gives way to extensive punning, both for humor and arts. A popular example is the word Fu, which can mean “good fortune” or “bats”. Therefore bats are considered good luck in China and are often used as decorative elements in furniture or décor items. In Western culture bats are often associated with vampires and the like, but in China they are among the most potent of good luck symbols. Fu can also be translated as “blessings”, implying not just good luck but divine good luck.

Almost every sound in the Chinese language is given to the same sort of double meaning. The word play often crops up in visual arts. A painting of a fish has the double meaning of “prosperity”, a Rohdea Japonica flower (also called a Sacred Lilly) is homonymous with “Ten Thousand” or a Hibiscus can be used as a pun for “wealth”. It is a very rich language to mine for both wit and artistic meanings.

The Rooster is another animal that may not be highly prized in Western culture, but in China they are considered emblems of high rank and well wishes. The written Chinese for “rooster” is a combination of two characters, 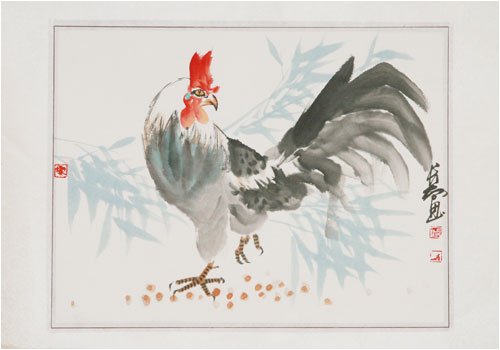 both make puns. Part of the word can imply “auspicious” while the other half makes a play on “nobleman” or more specifically “Duke”. The image of a rooster therefore implies both high rank and honor. Roosters are also thought to ward off evil as their crow marks the daybreak, ending the night and chasing away its shadows and evil spirits.