A Chinese dragon is a composite beast. It is said to have the form of a snake but with the scales of a carp. It has deer antlers and a whale’s tail; the feet are of a tiger with an eagle’s talons. A dragon’s face comes from a camel while the ears are derived from a bull and the eyes from a lobster. Though Chinese dragons do not have wings they do fly and are thought to make their home in the clouds, inside mountains and under the sea.

While dragons are symbols of power, they are never seen as frightful or evil in . Eastern dragons are an overwhelming force for good and their depiction in Asian arts is intended as good omens and sources of prosperity and good fortune.

Our blue and white dragon tray is a classic “double dragon” design. The two facing dragons represent “a happy reunion.” Courtly garments from the Qing Dynasty (1644 to 1911) often incorporated the same double dragon motif in silk embroidery. The motif can also be used for family ties or to show strong friendship.

The tray also includes a pearl painted at the center of the two dragons. Pearls are associated with wealth, luck, prosperity and sometimes wisdom. Often Chinese dragons are depicted with a flaming pearl clutched in their claw or under their chin. Artistically it is both a potent symbol of a dragon’s power as well as a play on simple monetary value. The flaming pearl in particular is one of the eight sacred treasures from Buddhist and Taoist traditions and it is said to have the power to grant wishes.

In ancient times, well before pearl farming or cultivating, the precious commodity was rare to an extreme. Quite simply any one who found a pearl also found a great personal fortune. Thus the folkloric attribution of a wish granting power to pearls. Cultures throughout the Orient consider the pearl as a jewel to fulfill all wishes. Buddhists consider the pearl one of their divine seven treasures. In it is believed that the yellow (King) dragon dons a pear-shaped pearl on his forehead, which has supernatural healing powers.

Surrounding the dragons on our tray are an assortment of traditionally stylized clouds. Dragons and clouds have a close association in because they are intertwined in the bringing of rain. Rain leads to crop growth and finally harvest, which is the ultimate in agrarian prosperity. There is also a hierarchal pun as well as a linguistic pun behind the use of clouds as auspicious symbols. A cloud is literally high up in the sky, so they are considerer an emblem of high rank, many courtly robes are embroidered with cloud designs. Also the word for “cloud” in Chinese has a pronunciation that is close to the word for “fortune,” thus clouds are used as an embellishment in Chinese arts to add a sense of importance to a design. 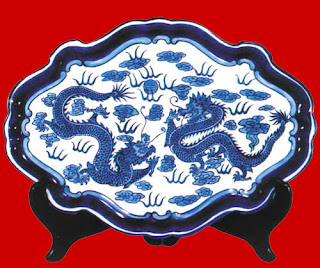 Our simple tray is full of expressive imagery when you know where to look. Even the shape is intended to evoke the shape of a cloud, further enhancing its good luck power. It is made of porcelain with blue cobalt oxide under glaze and a clear glossy over glaze. It is a fine example of Chinese porcelain based on the centuries of production that began with the Ming Dynasty (1368 to 1644). Because porcelain is a dense stoneware it is naturally dishwasher and microwave safe. The trays are available both in the store and online.

This simple yet distinctive "General's Hat" jar is 20” tall and finished in a natural white glaze. It is ideal for both modern décors and traditional settings with a colonial or Victorian flavor. It can seem tropical and exotic or become a comfortable part of an eclectic ensemble. ReOrient recently imported a limited quantity. They are available in the store and through our on-line listings.

have an elegant shape that lends a sense of levity to your décor. Whether elaborately decorated or finished in a single color glaze, the shape connotes a degree of seriousness. They look both imperial and austere. They are dramatic and can “tease you out of thought,” not unlike the Grecian urn in Keats’ over memorized ode. Placing them on pedestals on either side of a sofa will add drama to a room, placing them in an alcove raises an often ignored space to a level of note and using them as a center piece allows for both leaving it covered with its regal "General's Hat" lid or filling it with a fresh bouquet of flowers. Quite simply it is a great decorator’s item because it casts an air of stateliness and uplifts the significance of the objects which surround it.

The history of temple jars is somewhat misunderstood. That is to say no one seems to have a complete and authoritative answer as to how they were used in antiquity. In Chinese they are often called a "General's Hat" jar because the lid resembles the helmet of a Dynastic military leader. There is reference to this shape in a 1334 AD Chinese text concerning salt production. In modern times, both East and West use this urn shape for cremation remains but the jars have more than ample use outside of such ceremonial purposes. They can truly be considered just a jar, albeit one with a fancy lid. The ancient history of and the development of porcelain vessels is entirely one of utility. They were used for almost any kind of storage which could include anything from rice to ancestors. People who are concerned about the funerary connotations of temple jars need not worry as this has never been their exclusive use. There is also a similarly shaped vase, produced with out a lid, called a “Ming Jar,” which was clearly intended as a large dry goods storage vessel. Considering the extra expense that producing a lid entails, it is safe to assume that Ming jars and temple jars served a similar purpose in the ancient world, just to different classes of people.