What the West calls Fu Dogs (Foo Dogs) the Chinese call lions. Why is that? The root of the confusion between Fu Dogs or lions dates back at least a couple thousand years when Buddhism first crossed into China.

Lions are not indigenous creatures to China. But they did exist in India and traveling Buddhist monks described them, along with tales of the Buddha and the power of Buddhism. It seems temples in India perched stone lions at their doorways as symbols of protection. As Buddhism caught on in China, so did the idea of stone lions as guardians. Yet none of China’s stone carvers had ever seen a lion. But stone lions were demanded and to make due the artist used a more obedient and readily available model for their stone carvings, the dog. Thus was born a new mythical beast. Fu Dogs are lions and vice versa.

Fu Dogs have become a de-facto emblem of China. Few mythical beasts are as instantly recognizable. Through the centuries the Fu Dog morphed from after thought to guardian at the emperor’s door. To this day, having survived the overthrow of the Qing Dynasty in 1912 and Mao’s Cultural Revolution a spectacular pair of Fu Dogs still guard the thrown rooms in both the Forbidden City and the Summer Palace in Beijing. You will also find them in front of restaurants the world over, from Shanghai to Cincinnati. And they have been adopted by the Taoist practice of Feng Shui as well, which is interesting because as Buddhism swept across the Asian world it displaced many of the religions and philosophies that preceded it. Rather than be completely overcome, Taoism adapted and incorporated. And it could even be argued that the Fu Dog has very little to do with modern day Buddhism in China. Buddhism may have inadvertently created the Fu Dog but it seems they are more firmly rooted in Taoism today.

Typically stone Fu Dogs come in pairs, one holding a cub underfoot symbolizing protection of children and the next generation and the other holding a ball, symbolizing protection of the world. But this is mainly an architectural adaptation and may be a convention of Feng Shui and the need for balance. In terms of Buddhism, the origin of Fu Dogs, single depictions are far more common. That is why, apart from entryways, you will still see singular Fu Dogs in many forms of Chinese art and paintings.

One of our favorite examples of a Fu Dog from Reorient’s own collection is the hand carved stone box with a Fu Dog lid. We have a limited supply and each is a vintage piece, originally carved in the late 1970s. The period was a sort of short lived renaissance in China as the extremist cultural bans of the Maoist doctrine started to fade away. China was yet to become the world’s factory and small traditional carvings like these became the backbone of China’s international trade. Our small stash of these stone carvings was discovered in an old wooden crate in a warehouse almost entirely forgotten. So while they are over 30 years old they are still brand new. Each is entirely hand cut from a variety of black soapstone that has beautiful character and natural luster and veining. 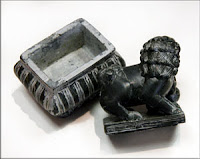 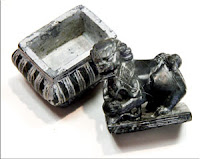 They are each about 5 inches tall and are perfect for a curio cabinet, desk or end table. Collectors of Asian art will appreciate them for the authentic style and unique black soapstone. Functionally they can be used to store paper clips and other little office essentials, burn incense or hide the key to your safe.

Stone carvings are an artistic way to make the mythical literal. Stone represents reliability and Fu Dogs symbolize protection. Make a gift of this Fu Dog box and you give loyalty strength and guardianship.
Posted by ReOrient at 2:52 PM No comments: