The Elephant as Symbol in Chinese Art

The elephant in Chinese art is a symbol of strength and wisdom. It also bears some reference to Buddhism as the elephant is a sacred animal in Buddhist traditions. In the Buddha is sometimes depicted riding an elephant, which may reference the religion’s origin as transported from .

The word for Elephant in Chinese is pronounced and written the same as the word for “sign” or “things to come,” so pairing elephants with other symbols creates a kind of pun.

A stone elephant emphasizes the concept of strength or power while an elephant with a vase can be interpreted as a sign of peaceful times. The words for “peace” and “vase” in Chinese have close pronunciations. It is also legend that during the Qing Dynasty elephants carrying vases on their backs were featured in parades celebrating the Emperors birthday.

Our elephant candle sticks, made of hand painted blue and white porcelain, draw from this tradition. The actual candle holder is a stylized vase, perched on the elephant’s back. Putting this set on your dinning room table declares peace in the home.

Another popular motif shows a young boy riding on the back of an elephant. This pairing announces the arrival of good fortune. In Chinese the phrase “elephant rider” sounds similar to “auspicious” or “fortunate.” Our Celadon teapot is an artistic adoption of this ancient Chinese theme. The teapot itself is formed like an elephant and its removable lid is shaped like the rider. 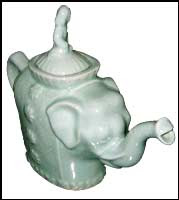 Reorient has many elephant items, including vases and planters. All are hand made and are personally selected by us on our buying trips to . The porcelain candle holders shown on this page are a slightly vintage find. They were produced in the late 1980s. The characteristic variance in the blue cobalt glaze is a tell tale sign of an old style coal or wood fired kilns. The heat in these kilns is not always uniform resulting in the slightly faded look of the hand painting.