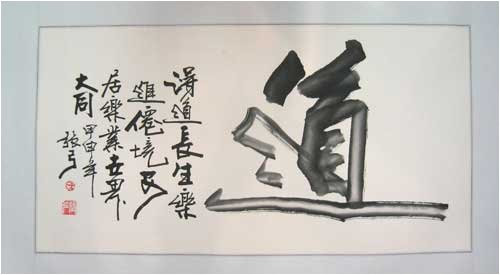 Taoism is as much a lens for looking at the world, as it is a philosophy. Taoist reasoning works its way into so many aspects of Chinese culture that it is difficult to separate them out. From the ancient arts of Tai Chi and Kung Fu to the most basic elements of writing with a brush, the concept of balance, finding harmony in the universe, permeates everything. Yet Taoism is not a specific religion or school of thought based on a specific collection of ancient texts. Taoism is more of an abstract idea that gets played out in painting, architecture, landscaping, meditation, military tactics, writing, cooking and the myriad acts and arts that make up life.

Most often Taoism is literally translated as “the path” or “the way,” which isn’t particularly helpful to understanding what “path” that might mean. In one way it can be thought of as the “ethical” way. But Taoism can also be interpreted as the path of least resistance. Overall the Tao is better thought of as “seeking balance.” In Chinese landscape paintings for example there is a concerted effort to portray a balance of elements and energies. The mountains, solid and immovable, are cut by water, fluid and ethereal. They co-exist and yet both push and pull against one another. Rock may stand in the river’s way but water will seek a path down and eventually wear its way through the rock. There is always this give and take such that you reach an effortless balance, precisely like the arm of a scale hovering in equilibrium. It’s a matter of “is” and “isn’t” in equal doses.

Creating art in China is very much an exercise and an exploration of Taoist balance, even when it isn’t called that by name. Buying arts in China is too. Westerners who go in seeking the deal, the low cost, the great savings, often come out disappointed. The same is true whether you are buying stone carvings or car parts. People from the West, focused entirely on price, will come away complaining of quality or difficulty in working with suppliers. But the fact is they sought a deal that was unbalanced. When you negotiate in China you are negotiating two things, price and what you will get for that price. You may think price is the only thing that changes in the negotiation, but it is not. The finished product, at least in the mind of the supplier will also fluctuate with the price. 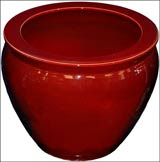 On our trips to China we always try to keep this form of business Taoism, or the Tao of buying, in mind. We are able to find and procure some of our best values when we remember not to seek a price but a balance. It may seem incongruous, but we are often able to offer some of our highest quality items at exceptionally low prices because we sought the Tao of value. Our fine oxblood porcelain pieces are just such an example.

Oxblood porcelain is itself an exercise in balance. The dramatic red coloration, with a certain luster and texture is not simply a matter of glaze and heat. To get that real authentic oxblood there must be a precise balance of glaze ingredients and kiln atmosphere as well as proper temperature. Too much oxygen in the kiln, or not enough and you may end up with blue or purple instead of the brilliant red. It is all a matter of balance.